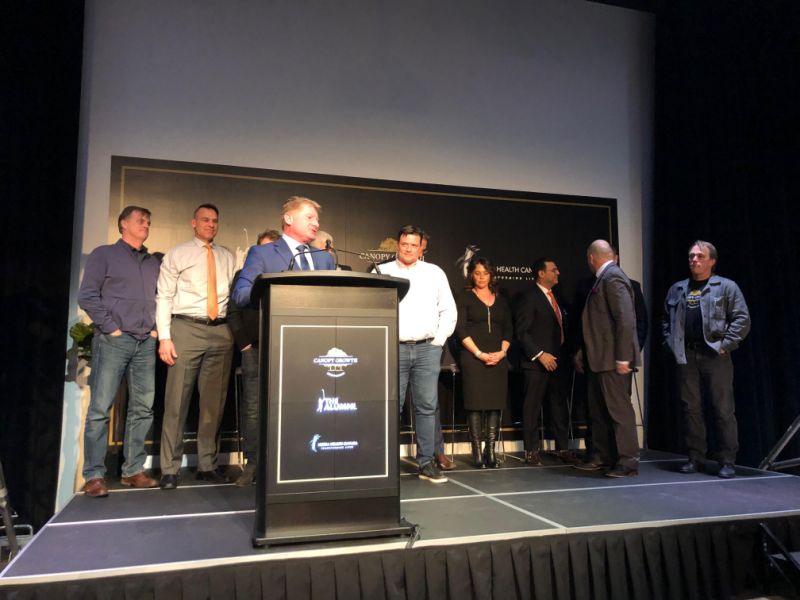 WEED.TO) has entered into a first-of-its-kind partnership with the NHL Alumni Association (NHLAA) and NEEKA Health Canada to explore cannabis-based neurological treatments for athletes.

The partnership will begin with a double-blind clinical trial involving about 100 former hockey stars, and is aimed to reduce reliance on highly-addictive opioids and other pharmaceutical painkillers.

NHLAA executive director Glenn Healy made the announcement in Toronto on Saturday, flanked on stage by former players. He said the hardest part of his job has been receiving calls from players’ families as they cope with the neurological consequences of years on the ice.

“It’s never the player. Never. It’s always the wife. ‘Something’s not right.’ Or it’s the kid. ‘I want Dad back. Dad is not right,’” he told attendees at Saturday’s press event. “I really don’t have an answer. As of today, with this partnership. We are going to have science to back those answers.”

Researchers estimate between 1.6 and 3.8 million athletes suffer a sports-related concussion each year, and 10 to 15 per cent go on to develop symptoms that can affect their ability to function.

The initial study, to be led by NEEKA Health Canada and neurosurgeon Dr. Amin Kassam, will begin this summer and conclude in one year.

Eighty of the 100 participants will receive pills containing a CBD compound, and 20 will get a placebo. Researchers will use an array of tests from MRI brain scans, questionnaires, and tablets with software measuring speech and writing patterns, memory and, emotional state.

The goal is to better understand how cannabis can be used to treat athletes at risk of long-lasting consequences from head injuries.

CBD is a cannabis-derived compound that does not give users a “high” like its cousin, THC. It’s exploded in popularity in recent years as a treatment for anxiety, depression, chronic pain and post-traumatic stress.

“We know many athletes are self-medicating with cannabis and its derivatives in an attempt to reduce both physical and emotional consequences of head injury,” said Canopy Growth chief medical officer Dr. Mark Ware. “The idea that compounds found in cannabis may be effective in treating symptoms of concussion is well-grounded in neuroscience.”

Dr. Amin Kassam, a neurosurgeon and founder of NEEKA Health Canada, said NHL players were sought out for the research because they are “most afflicted” by the conditions targeted by the study.

He said his aim is to collect an inventory of their mental health, as well as cognitive and memory changes that have occurred following their professional hockey careers. That analysis will inform the development of new cannabis-based treatments.

“This is chapter one of what is a legacy project. As much as we think it’s for the players. You are just lending us your bodies and your minds so that we can help all of us,” he said.

Canopy Growth founder and co-chief executive Bruce Linton hopes the star-power of the NHL players will build better awareness for what medical cannabis has to offer.