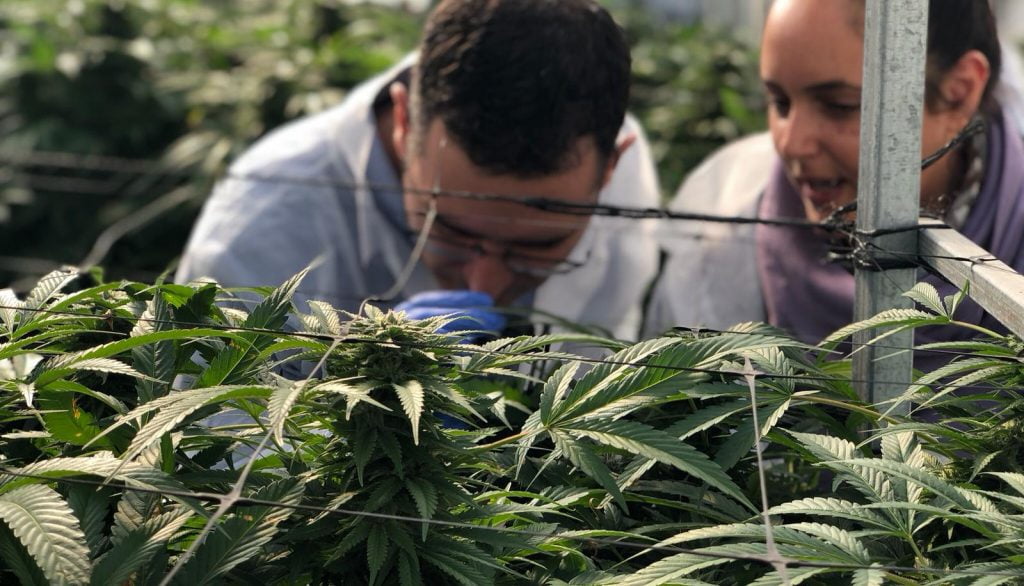 Israel leads the world in researching and prescribing medical cannabis.

Doctors have been legally offering it to patients since 1999 and Israel now imports more cannabis for medical use than any country in the world.

But there are still barely 100 doctors who are licensed to prescribe it – out of around 30,000 – and there is still considerable reluctance among healthcare professionals to engage with it.

Many are dismissive. They refuse to see beyond its mind-altering powers as a recreational drug and to embrace its medical potential.

That’s despite the fact that more than 123,000 patients in Israel are currently licensed to have cannabis prescribed by their doctor – that’s one in 73 of the population. Between them they consumed 4.7 tonnes of cannabis in December 2022, according to government figures.

But cannabis still isn’t on the curriculum for Israeli medical schools.  New doctors graduate without learning anything about cannabis, and older doctors are often wary.

Prof. Yossi Tam wants to change that. He wants more awareness of the drugs among medics and patients, more research, and more prescriptions.

He studied under Raphael Mechoulam, the professor of Medicinal Chemistry at the Hebrew University of Jerusalem, who is widely known as the father of cannabis research for his pioneering work over 55 years.

Prof Tam, who heads his own lab at Hebrew University developing cannabinoid-based therapeutics, developed the physical course that educates and licenses doctors to prescribe cannabis.

“Nobody learns about cannabis during med school, not here in Israel, not elsewhere. Doctors  don’t know how cannabis influences the body and how it targets specific receptors in our body,” he says.

“Many different types of condition can benefit from the use of cannabis, but no information is being delivered to the doctors to understand the opportunities, the side effects or the combination with other drugs.”

He says doctors learn about dopamine, the brain’s “feel good” chemical when they learn about treating Parkinson’s disease, for example, but not about cannabis and cannabinoids, which are well-established treatments.

Cannabinoids are the 100 or so chemical substances in cannabis that affect our body and brain. The best-known is THC (delta-9-tetrahydrocannabinol), which is responsible for the psychoactive effects.

Together with the Ministry of Health, he and others created a physical course for medical practitioners in Israel to be licensed to prescribe cannabis.

Doctors who take the 40-hour course, run by The Hebrew University’s Multidisciplinary Center for Cannabinoid Research (MCCR), and pass a Ministry of Health exam, are allowed to prescribe cannabis.

Prof Tam wants more doctors to take the prescribing course, but more than that, he wants all healthcare professionals to understand the benefits of medical cannabis.

Greater understanding will promote cannabis from being, in many doctors’ eyes, a last resort to a first line of defense in cases where there’s a clear, clinical benefit.

“Only the physical course done in Israel allows Israeli doctors to prescribe cannabis. But the virtual course, called EduCann, is an educational platform to serve anyone worldwide with an interest in medical cannabis,” says Prof Tam.

“We give people historical background about cannabis, explain the different therapeutic potentials of cannabis and its side effects, interactions with other drugs, and updates on new research.

“The virtual course that we are promoting is open not only for medical practitioners, but for anyone who is interested in getting more information.”

It takes the form of over a dozen movies, such as Cannabis and Cancer, Cannabis and Pain, cannabis and Children’s Diseases, Cannabis and Gastrointestinal Conditions, and is available in English and Spanish, to address the needs of Latin American countries.

Prof Mechoulam, now aged 92, once said:  “I have spent most of my life decoding the mysteries to be found within this incredible plant … I would like to see my colleagues forge ahead with their investigations, advancing even further the acceptance and integration of cannabinoids in traditional medicine.”

Prof Tam acknowledges that cannabis isn’t, as he puts it, a “magic bullet”. But he believes passionately that more research and more education will ultimately help more patients.

“There is a lack of information and there is lack of clinical evidence that shows its benefit,” he says.

“However, during the past 50 years or so that people have been using cannabis, we have learned that cannabis can actually assist in treating chronic pain, in reducing chemotherapy-induced nausea and vomiting, in reducing spasticity symptoms that are related to multiple sclerosis, in treating sleep disorders, in being able to help people with post traumatic stress disorder, with anxiety, epilepsy and with autism.

“So there is a huge potential to use cannabis for all these types of conditions. And I’m sure that that are many more, but we need to invest a lot, financially, into research to find out more.”

“This course will propel the advancement of medicinal cannabis and its usage, offering patients and doctors the benefits of cannabis treatments. Yissum is proud of this project and looks forward to the course’s inevitable growth,” says Dr. Itzik Goldwaser, CEO of Yissum, Hebrew University’s technology transfer company.